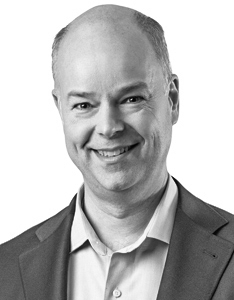 The Honorable Jamie Baillie has a proven track record of leadership in business, politics and government.

Before joining Samuel Associates, Jamie dutifully served the people of Nova Scotia as Leader of the Progressive Conservative Party and as the Provincial Leader of the Official Opposition. During his eight-year term in elected office, he advocated and fought for political accountability and improved economic opportunities for Nova Scotians. While in office, Jamie championed Nova Scotia's need for better mental health services and healthcare access.

Before taking on a leadership role in politics, Jamie served as the President and CEO of Credit Union Atlantic. In this role, Jamie restored and transformed the member-based financial institution to record profitability, long-term growth and sustainability. In recognition of his community and business achievements, Jamie was named by Atlantic Business Magazine as one of Atlantic Canada's Top 50 CEOs for five consecutive years.

Jamie began his government career as Chief of Staff to the Premier of Nova Scotia, implementing policies that improved the province's community college system and balanced the provincial budget. In this role, Jamie worked closely with his counterparts in the federal government and other Provincial and Territorial political leaders.

Jamie continues to be an active community leader and volunteer. Throughout his career he has supported important causes including the Nova Scotia Division of the Canadian Mental Health Association, the United Way of Halifax, Neptune Theatre, the Halifax International Airport Authority and Dalhousie University.

As a graduate of Dalhousie University, he earned a Bachelor of Commerce degree and went on to achieve his designation as a Fellow Chartered Professional Accountant (FCPA). Jamie also completed the Canadian Securities Course. As a believer in ongoing education, he received Certificates in Entertainment Law from Osgoode Hall Law School and the Executive Management Program at the University of Chicago. He also completed a senior executive leadership program at Harvard Business School.

Jamie resides in Halifax with his family, where he is an avid golfer and proud curling fan.